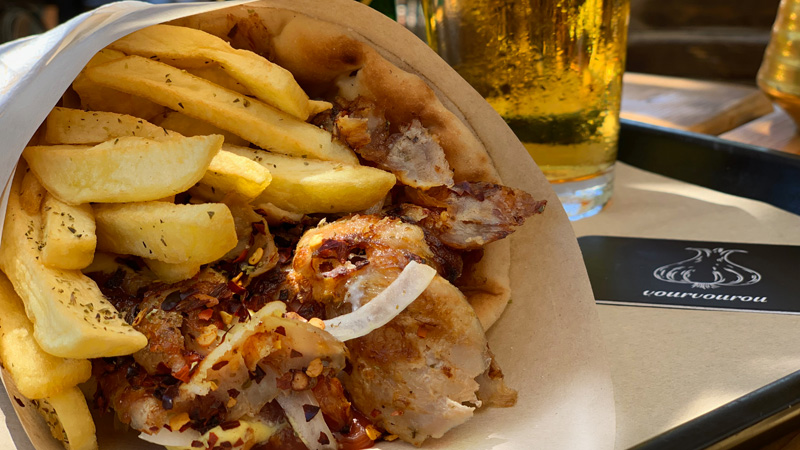 Gyros is the Greek Fast-food that’s as native to Greece as the hamburger is to America. When vacationing in Greece the Gyros may very well be an irresistible lunch since its fast, tasty, and affordable.

What is a Gyros?

Mediterranean neighbors all have a similar sandwich with their own local flavor. Turkey keeps the Kebab, Lebanon and the Middle East serve up the Shawarma, and Greece has spun their own version… the Gyros.

All these sandwiches find their basis in meat roasted on a vertical spit that are flavored with local spices. The meat shavings are then scooped onto a pita or flat bread, topped off with fresh vegetables and dollops of yoghurt sauce, then rolled up into a tasty wrap.

The Greek Gyros has it’s own unique flavor of pork, chicken or beef, fresh tomatoes, onions and french fries wrapped up in a Greek pita and garnished with ketchup and mustard. Add tzatziki if you want to freshen it up, and for spice ask to throw in some “Boukovo” (chili flakes).

Where are the best Gyros in Sithonia?

Gyros shops are plentiful and generally all are about the same price, but of all the Gyros shops in Sithonia there are some that stand out from the pack and for different reasons. Situated just a few meters off the spectacular Karidi beach, Melia restaurant has a Gyros stand where you can eat in, take out or even have your order taken on the beach.
To say that Melia’s gyros are gourmet would be an understatement. All sandwiches come with a unique twist. The Calamari Gyros can’t be found anywhere else, its Melia’s own authentic creation. Other fanciful flavors such as curry and mint are cleverly introduced in Melia’s gyros sandwiches. Melia can offer you a different gyros every day for a week with a culinary experience you won’t get anywhere else! On the main road in the center of Vourvourou, this hip burger/gyros joint has a cool vibe.

The gyros cost a bit extra but for the atmosphere and the amazing taste, you can’t go wrong. The young owners have an entrepreneurial spirit and have made a great success of their restaurant. If you had one gyros too many (though you’ll never regret ordering Garlic’s gyros), try one of their massive gourmet burgers that are held together by a knife speared through the middle. Ovelix is in the center of Sarti just a block off the beach promenade.

Ovelix Gyros are the typical pork or chicken but have consistently good sized portions and good flavor. They are always busy and serve with a smile. Next to the traffic lights in Nikiti, Gyropoleion is a Gyros/Burger restaurant.

The prices are slightly higher than the normal by 20-30 cents and you won’t get a beach view, but you won’t find a larger gyros sandwich in all of Sithonia. Lots of meat and fries that make it impossible to fit in your mouth. Come hungry! Their burgers are also large and tasty. A small family run gyros stand just off the beach in the center of Toroni on the main road.

You won’t find a better gyros in Southern Sithonia. The prices are good with decent size sandwiches (pork only) and good flavor consistency. They advertise themselves as being the best gyros in Toroni and without a doubt we would have to agree with them.

Yearly there are new gyros shops popping up and closing down in Sithonia. Not every single gyros stand has been sampled by us but almost. If you have a special find, please inform us so we can check it out and see how it measures up with the “Sithonia top 5”.