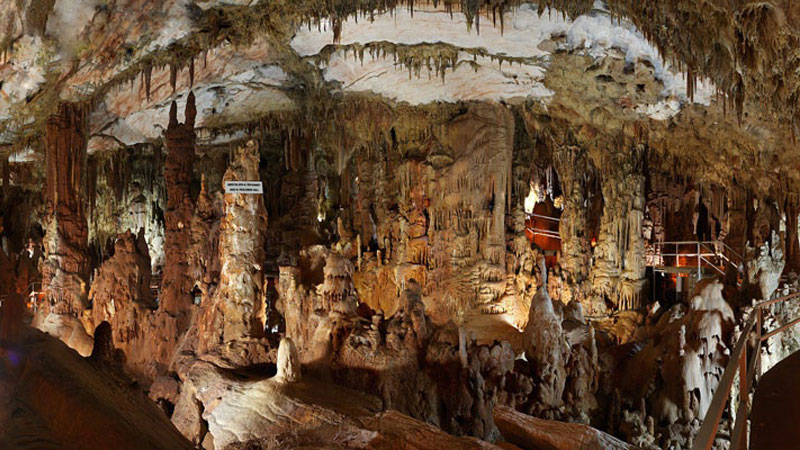 So you are planning your trip to Sithonia and you are wondering what if it rains, what will we do?
This is where you need and ace up your sleeve to make the kids happy. One of the local favorites is Petralona Cave.

The real reason to come to Petralona Cave is of course for the cave. Museums are, well… just museums, not so interesting, but caves are a whole other story. What man, or boy for that matter, doesn’t want to get inside of a cave? So what’s Petralona Cave all about?

In 1959 a local shepherd looking for water, found a cleft in the rock on the slope of Mount Katsika about 50 km south of Thessaloniki. When two men decided to lower themselves into the chasm, they were amazed to find caverns filled with stalactities and stalagmites. The following year excavations began on the 2000 meters of corridors that make up this subterranean area.

Now housed in the University of Thessaloniki, the cranium of a man was discovered and is believed to be the oldest human remain in Greece. The skull dating process appears to have started a debate in which many are accusing the Greek government of a cover up. The original archaeologist (Dr. Poulianos) estimated the skull to date back 700 000 years. This led to his being removed from his job since the common belief is that no humans could have existed at that time outside of Africa.

The cave tour takes about 30 minutes and you will walk through several caverns that served as home to both humans and animals over the ages.

Next to the cave is the museum that shows the finds of the excavations. The showcases contain mainly bone remains of both human and animal origin. There is practically something from every kind of animal such as bears, hyenas, lions, wolves, foxes, horses, rhinoceros, bison, bulls, goats, and wild boars.

The museum also has a plaster model of the cavern depicting where the skull was found.

How to get to Petralona and what does it cost?

Check out our sister site here for all the details about Petralona cave.