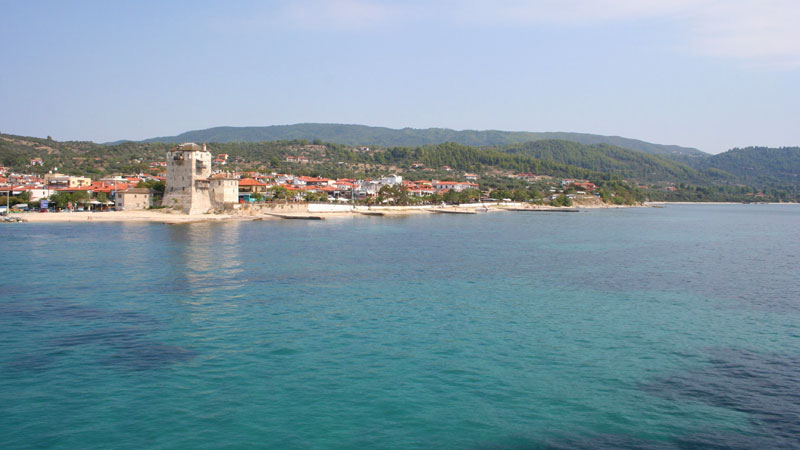 Ouranoupoli – a gem in Halkidiki.
The small village of Ouranoupoli, located on the northern end of the Athos peninsula is a popular destination for those who decide to take a Mount Athos boat tour.

After cruising along the western side of the Athos peninsula and seeing the many monasteries, the boat will bring you to Ouranoupoli for a 2 hour stop. Unfortunately 2 hours is not enough to give justice to this gem in Halkidiki. Built on the border of the monastic republic of Athos, you can’t go any further, you have literally hit the end of the road.  Ouranoupoli has managed to escape the mass tourism that the first peninsula, Kassandra, gets and tends to live off the tour boats, which briefly pass through every afternoon.  With its 14th century tower dominating the harbor, there are many good photo moments to be had in Ouranoupoli. Some fascinating history happened in the area of Ouranoupoli, such as the building of a canal by Xerxes, king of Persia in 480 B.C.  About 12 years earlier, Persian ships rounded the southern tip of Athos only to face destruction by the fierce winds.  To avoid a repeat, Xerxes decided to carve out a canal straight through the peninsula at its narrowest point. Once completed, he attempted to invade Greece again.  Nothing is to be seen of the canal as it had been abandoned after his invasion.

The 14th century tower by the harbour goes back to the time when the monastic territory of Athos extended much further up the peninsula.  The tower was part of an important monastery in the area and was used as a protection against pirate raids.

More recently the town was settled again in 1922 during the Greek/Turkish population exchanges. The locals were isolated because no roads existed due to an ancient law forbidding roads to be built to Mount Athos, so the only method of transport was by sea.  In 1959, the people of Ouranoupoli ended this isolation when they took shovels in hand and carved out a road for a distance of 9 kilometers.


What to do in Ouranoupoli

By the time you arrive here from the boat tour, probably the first thing you would want to do is eat!  From the boat, as you enter the harbour, the first thing you notice is the abundance of restaurants lining the beach. This is a fishing village, so what better to eat than the freshly caught fish, calamari, octopus, mussels and others.  The prices are reasonable. Try the wine produced on Athos, one of the more reputable is Tsantali.

The old town is very attractive.  You can walk through the maze of alleys and streets with many shops that sell jewelry, clothing, souvenirs and an abundance of works put on display by artists. If time allows, you can also go for a swim from one of the local beaches or if you decide to stay here for some time, then definitely take a boat to one of the 5 uninhabited islands located directly in front of Ouranoupoli.

The region is covered in wonderful pine forests and is a good place to go for walks and cycling. Check out the Halkidiki guides for some cycling tours in the area around Ouranoupoli.