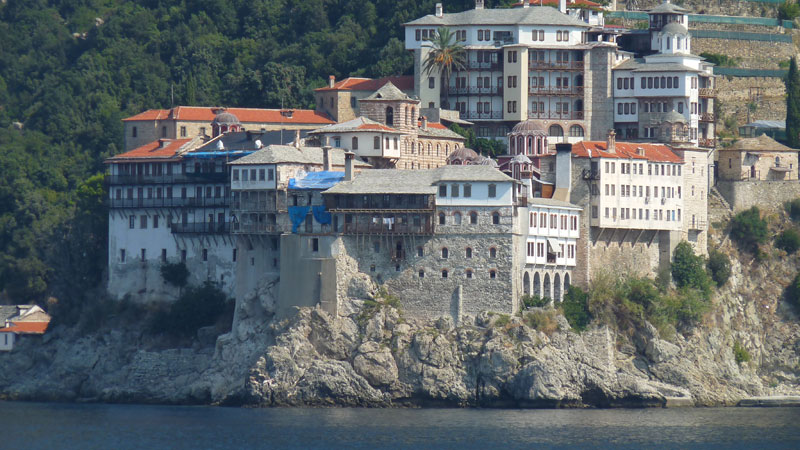 When taking a Mount Athos cruise or boat tour from Sithonia, the excursion begins in Ormos Panagias.  Starting early in the morning, the boat will cross the gulf to the southern part of the Athos peninsula.  From the base of Mount Athos, the tour boat will gradually work its way north along the Athos shoreline where you will have spectacular views of the following historical monasteries. (Click here for information how to get a visa if you want to set foot on this historical peninsula in Halkidiki.) First appearing in documents in the year 972, it was built on the ruins of an ancient monastery called Eisodiou, which had been founded in the year 337 AD.  It was named after Pavlos Xiropotaminos who was the founder of the monastery.  It’s library contains 495 manuscripts and 12 500 printed books.  Agios Pavlos claims to have a part of the gifts brought to baby Jesus by the Magi. Founded in the 14th century by St. Dionysios. After being destroyed by fire in 1535, it was rebuilt and since then has been unaltered. It served as a fortress giving protection against pirate invaders. The library is well organized and stocked with 804 manuscript codices, and other works including a 13th century Gospel book. Considered one of the most organized and strict of all the monasteries on Athos, Gregoriou was built in the 14th century.  Raids and fire had destroyed much of the original library, but the Gregoriou monastery still holds onto 297 manuscripts and 4500 printed books. The monastery has a vast treasure display with ancient relics, and also display the bones of St. Niphon, Patriarch of Constantinople. Towering 230 meters above the sea and built on a large rock foundation is the impressive monastery of Simonas Petras. Founded in the 14th century by St. Simon who claims to have seen a star over this place and originally named the monastery ‘New Bethlehem’.  After being destroyed by a fires in the 14th and 17th centuries and again in 1891, it was rebuilt by the generosity of Russian Tsars. Even though the library is well organized, there are no noteworthy treasures. Founded at the end of the 10th century by Pavlos Xeropotamenos.  Xiropotamou survived two fires in 1507 and 1609, which caused severe damage to the monastery.  The monastery has seven chapels and a library with 4000 volumes of printed books along with 409 handwritten codices. The monastery claims to have treasures such as fragments from the ‘True Cross’ and relics from many saints. The original building dates back to the 11th century but the current, Russian monastery was built in 1765.  In 1903 it was reported that 1446 monks lived here but has severely declined since then. The monastery looks more like a town transplanted from Russia with its traditional Russian architecture. The bell tower houses the largest bell in Greece and the library contains 1320 Greek and 600 Slavic manuscripts and over 20 000 Greek and Russian books. Built in 1010 AD by the monk Xenofon. It was destroyed after the fall of Constantinople and rebuilt with financial aid from Eastern Europe. It’s library houses 300 manuscripts and 4000 printed books. Founded from 1030 – 1032 by monk Daniel. In Dochiariou monastery is located the largest Katholikon (Cathedral) in Athos, built in 1568. The monastery claims to have fragments of the ‘True Cross’ as well as saints’ relics. The library has 395-catalogued manuscripts, 46 unclassified manuscripts and 1500 printed books. Known as the Bulgarian monastery, Zougrafou was founded in the 10th century by monks from Ohrid who went by the names of Moses, Aaron and John.  The library, located in the tower, has some rare manuscripts, Greek and Bulgarian codices, and 10 000 printed books in Greek and Slavic. One codex is from 1745 and contains details of Bulgaria’s early history.