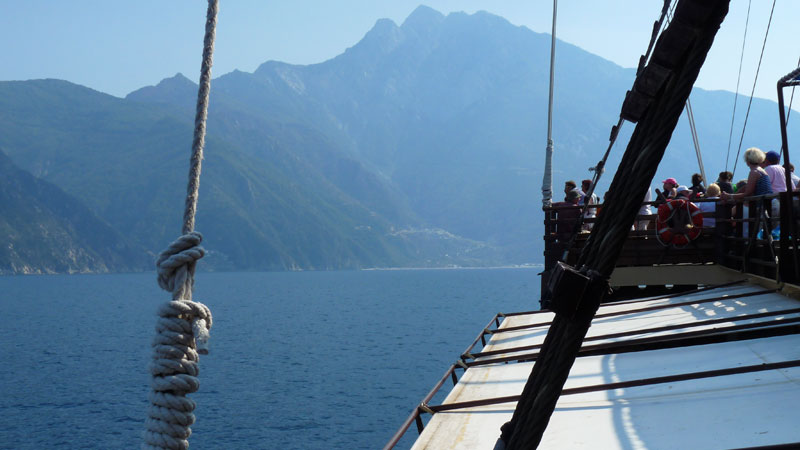 On a beautiful late September morning, we get up early to rush down to Ormos Panagias, an attractive little harbour town on the east side of the Sithonia peninsula of Halkidiki.  The weather is beautiful for this time of year.  Sunny and with a temperature in the high 20’s, the conditions couldn’t be more perfect to experience a day cruise in the north Aegean sea. Our destination? Cruising along side the ancient monasteries of Mount Athos.

This is one of the top reasons for tourists to come here. Mount Athos is a monastic republic, walled off from the rest of Greece. The only way to enter is by boat through a port of entry and then by foot to the monasteries.  The catch is that no women are allowed and the daily number of visitors are restricted by entry permits that are obtained in advance. So the next best thing is to go on a boat tour that cruises up the western side of the Athos peninsula. As we drive into Ormos Panagias, we join the masses of people that descend on this village at 9 am in cars and buses, all with the goal of boarding one of the several boats bound for Athos. We have tickets for the pirate ship ‘Menia Maria III’, a large ship that can hold up to 600 people over 4 different levels of decks.

The attraction is that this ship (newly built – 2004) was designed in the style of a 17th century galleon, giving you a feeling of going back in time. Just seeing this ship advertised on the Internet, I wasn’t going to settle for any other boat. And yes, it comes with a pirate! With his 18th century flint-lock pistol pointing at their backs, he seemed to be more of a hit with the older women than he was even with the children. Just don’t let him kidnap you.

As you depart in the morning, the trip to the southern tip of Mount Athos is about 2.5 hours.

If you are fortunate, you may even be entertained with dolphins that play in the waters of the Aegean and from time to time accompany the ship on its journey.

Around noon, you reach the monasteries that start from the southern tip of Mount Athos and are scattered along the shore of the Athos peninsula.  A guide gives a well-prepared description of all the monasteries and their history in Greek, English and German. Some of this architecture is dated back 1000 years and were built on foundations that go as far back as the 4th century AD.  Find out more information about the monasteries of Mount Athos.

The peninsula has been inhabited by monks for the last 1000 years. The untouched surrounding forests give you a beautiful view from the boat of densely forested slopes with ancient monasteries clinging to cliffs, framed by a dramatic background.

By 1:30 pm, the boat reaches the fishing village of Ouranoupolis.  Symbolized by its 14th century tower at the entrance to the port, this town makes for some good photo opportunities.  The old town is spread out along the beach with tavernas and beachfront restaurants that offer you traditional Greek grilled foods and seafood. This is a good spot to stop for lunch.  After a bite, take a walk through the many shops for jewellery, souvenirs and clothing, or go for a swim in the refreshing clear waters underneath the tower. Just remember you are here for only a maximum of 2 hours so don’t miss the boat… On the way back to Ormos Panagias, the crew of the ‘Menia Maria III’ go to great lengths to keep you entertained with Greek folk music and dancing with a variety of traditional costume.  You can have a taste of the different styles of dance that come from the various parts of Greece, estimated to number as high as 4000.  The dancing troupe will try to include some from the audience and teach you how to do the ‘Sirtaki’, a dance that was choreographed for the film ‘Zorba the Greek’.  This sets the mood as you cruise westward, back to the port where you started your adventure.

Bring a change of clothing as the morning can be cool on the boat, but as the sun climbs it quickly gets hot. Also have sunscreen with you, though you don’t tend to feel the intensity of the sun when you are out on the water with the breeze. And bring a swimsuit and towel if you decide to take a dip in Ouranoupolis.

The prices of drinks on board can be pricey for some. A 400 ml beer will cost you 3.50 euro and a slice of pizza 3 euros.  Even the coffee is around the magical price of 3 euros.
A coffee in the morning before you board in the square of Ormos Panagias is cheaper than on the boat.  Also the prices in Ouranoupolis can be more reasonable. One restaurant seems to have a good business spirit, you can see from the boat as it enters the harbour of Ouranoupolis, a large sign in blue – ‘seafood 6 euros’.  The tourists tend to head straight for this restaurant, which fills up quickly.  You can get fish, calamari or any other type of seafood for the one price of 6 euros. The price of a beer is also a reasonable 2.50 euros.

After the cruise, you can also sit in Ormos Panagias and find yourself reasonably priced drinks in the square by the old church. Contact Michael at Ormos Travel – they are the official representatives in Ormos Panagias for this tour boat and can offer you more competitive prices than the other operators.