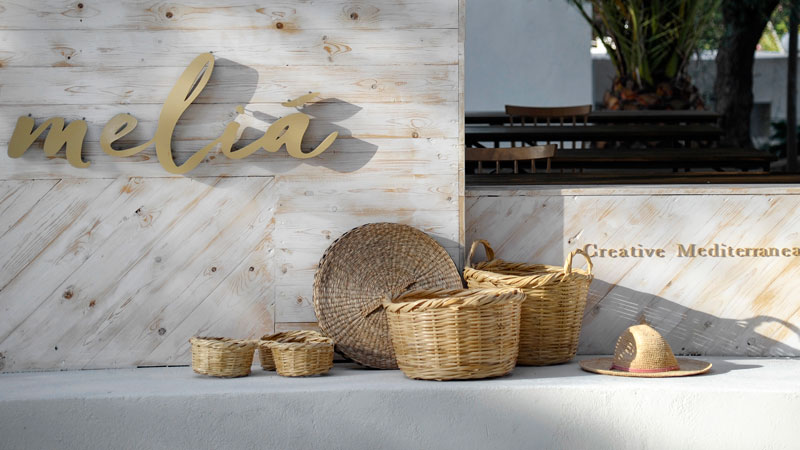 When we heard that Melia Restaurant was opening up on Karidi beach we were quite excited, not just because one of Halkidiki’s most searched for and Googled beaches was finally getting a restaurant, but because of the kind of restaurant that was opening up.

Vourvourou attracts an upper class tourist and we have always been surprised at how few restaurants there are to meet the demand. Melia Restaurant brings a whole new concept of fine dining to Vourvourou and Karidi beach. Normally you would conclude that a restaurant of this class would come with a high price but Melia Restaurant has a range to satisfy everybody’s budget.

Melia is the creation of Yannis Baxevanis, Greece’s most renowned celebrity chef who has revolutionized Greek cuisine. Restaurants under his supervision have opened up around the world so it was with great excitement to see such a high profile and globally acclaimed chef bring his talents to Halkidiki.

In his menus, Mr. Baxevanis has managed to capture the flavours of the local flora which he incorporates into his recipes. His approach to cuisine has won him numerous awards and praise from around the world as he has been reviewed in newspapers such as the New York “Daily News,” Switzerland’s “24 Heures” and “Le Temps,” Dubai’s “Gulfnews” and “Le Monde” of France. He has been called the “Aroma Magician” due to his ability to combine age-old recipes with locally grown herbs and add his own modern twist to create such unique recipes.

Of course we jumped at the opportunity to go to Melia Restaurant and see what entrees Mr. Baxevanis has managed to put together for Halkidiki.

With its open air design, Melia restaurant does a fantastic job to combine primitive surroundings with sophistication. Situated in a pine forest, the restaurant puts you at one with the nature and perfectly compliments the natural approach to Yannis’ dishes.

As a starter, let yourself be entertained by shrimp grilled on a stone! Right before your eyes the chef grills shrimp on a heated stone that was taken from the sea. One by one he then carefully places the shrimp on medallions of fresh bread that are smothered in taramasalata (Greek meze from fish roe). Then he sprinkles the shrimp with a dried salt-seaweed seasoning for that perfect final touch giving a full sea flavour.
As a side-dish, we cannot fail to recommend the Rucola salad served on a fresh cheese base coated with seasonal fruit such as strawberries or peach slices. Smacked with lemon sorbet and thyme this salad is guaranteed to provide a flavour explosion for your taste buds. And how about scooping refreshing tzatziki out of a bowl made from non other than sliced cucumber — really a stroke of genius!

The mains range from a beef skirt filet grilled to perfection, to a variety of oven-baked fresh fish bathed in fresh local herbs. If you’re hungry you’ll fight to get down the enormous local pork steak. It is perfectly charbroiled and almost fills the plank board its served on, but leaves just enough room for a couple of bacon garnished baked potatoes.
For a lighter dish, the green garden salad with grilled chicken and hazelnuts comes glazed with a tangy flavoured fruit and citrus sauce. The lamb is a yummy main, tenderly roasted in a slow cooker and placed on a bed of risotto with cheese and herbs. Melia has such a variety of dishes that all look pleasing to the eye and are truly rewarding to the palate. When accompanied by Melia’s bottled house wine you have the recipe for a perfect evening!

Karidi beach is not a developed beach. Since there are no other restaurants or snack bars, Melia Restaurant has cleverly filled the need. At the side of the restaurant there is a take-away window where you can order all your Greek lunch favourites and of course all come with a clever variation.

For example try the spicy pepper gyros with melted cheese or their meatball sandwich enlivened by melitzanosalata (roasted eggplant dip). Not to be passed up is the one of a kind calamari sandwich served in a pita with a pleasantly unexpected hint of mint and taramasalata. Even the pita bread is freshly prepared within plain view so you can watch your lunch and your appetite being built before your eyes. After such divine sandwiches, wash it down with a refreshing minty mojito or cocktail of your choice. Take it to the beach or if you don’t want to walk the 50 steps, then sit down with the family and enjoy your meal on the shaded tables by the restaurant.

While we expected Melia Restaurant to be more expensive that other restaurants in Vourvourou, we were surprised by their reasonable prices. Main dishes start from as low as 8 euros for pastas or a gyros plate, around 15-16 euros for a fish plate and the most expensive is around 20 euros for a steak. Such prices, by our standard, were acceptable especially considering the size of the meals.

While being at Melia, we found out that Yannis Baxevanis does make a guest appearance from time to time and personally prepares the meals. Check with the restaurant or on their facebook page for more details about when he will be in Vourvourou and don’t pass up the opportunity to have your meal prepared by Yannis. If you are planning a special event such as a wedding, the team at Melia are also prepared to cater to such events.

In conclusion, Melia Restaurant with it’s outdoor atmosphere, the twice a week (Wednesday/Friday) live music and the entertaining fine dining experience all combine to make this restaurant a “must” on your list of things to do when visiting Vourvourou.