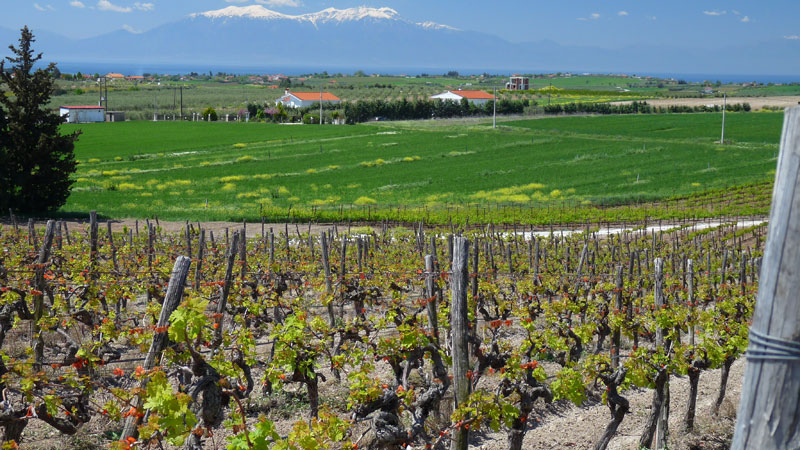 Even though there are claims that Macedonia and Thrace have been producers of wine for some 5000 years, wine in Halkidiki and in Greece is just starting to make a comeback. And we are not talking about retsina (a typical Greek white wine with the flavor of Pine resin).

Aesop – an ancient Greek writer of fables from the 6th century BC, wrote about the “Old woman and the wine-jar”. In this fable an old woman finds an empty jar that had been used for quality wine. With the scent still lingering in the jar, the woman brings it to her nose and inhales it again and again. “Oh, how delicious!” she says, “How fine the wine must have been that it leaves its sweet perfumed scent in the vessel that contained it!” The moral of the story is that a good deed leaves a good memory.
For the Greeks in modern times, it can also be said that like this woman, good Greek wine is just a memory. Macedonia has a rich history of wine production but fell into severe decline when the vines were destroyed by disease at the beginning of the 20th century. It seemed that the good old days of Greek wine production had met their fatal end.

Since then and since joining the European Union, the wine industry has been making a comeback. With foreign investment, and estimates of over 300 indigenous vine varieties, the potential for the future wine industry of Greece is explosive.

I’ll have that one over there…

The last years of hard work has been paying off as some Greek wines are emerging as star players on the international scene. Some of their best are white wines made from grape varieties such as Assyritiko, Athiri and Roditis. If you can’t pronounce it,  just point. A glass or two will help you get your tongue around the name. As for the reds, the popular Xinomavro is worth experimenting with. It is compared to a Pinot noir, but if not aged for 5 years it can be acidic – approaching 10 years they really improve. When blended with other sorts like Negoska, the acidity is tempered so it enables the wine to be ready to drink earlier.

The wine roads of Northern Greece

In Macedonia and Thrace, 7 wine routes have been mapped out and labeled as the wine routes of Northern Greece. Organized tours are offered with bus transportation and your accommodation along the way. While the quality of Greek wine still has room for improvement, such wine tours can be a fun way to traverse the exquisite northern region of Greece with all its history and of course a little wine along the way makes it even better.