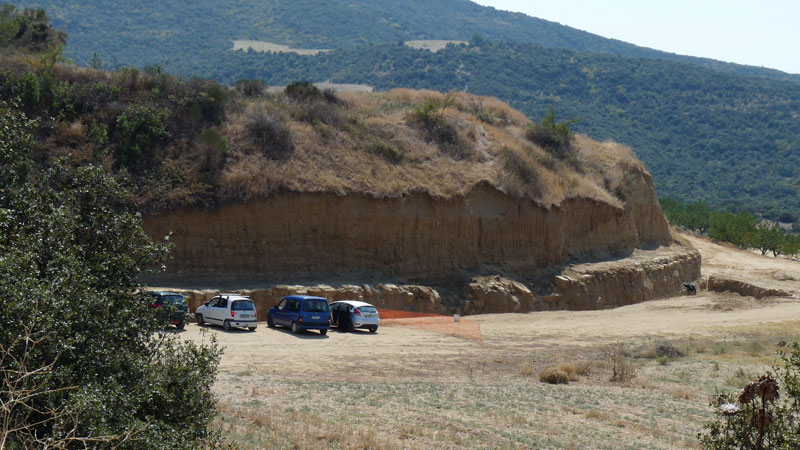 Almost in the backyard of Halkidiki a fantastic discovery was made in the town of Amphipolis, just a short drive from Halkidiki. A tomb of somebody very important. Speculation was going around as to if this could be the very tomb of the man who put Greece on the map – Alexander the Great!

On hearing this news, of course we jumped in the car for a short drive to check out what was making news and could bring millions in revenue to this sleepy part of Greece.

From the main road you can clearly see the mountain where the excavations are going on. It appears from here that the whole hill top once contained a massive mausoleum. As a matter of fact, the circumference of the tomb so large that it is measured at half a kilometer. A 5 meter wide road lead up to its entrance. The stone lion located about 5 kilometers from Amphipolis is suspected as once having been the trophy on top.

Despite being clearly visible from the road, it is a different matter if you want to get there. We wind our way through the potholed streets of this small village and ask the local… “where is the tomb”? They all know, since last year this village has been inundated with archeologists, politicians and of course police to protect the secret.

Finally we find the dirt road that winds up the mountain and brings us to a 10 meter high sand hill with excavators carving out trenches to reveal the foundation stones of this mysterious discovery. We arrive on the day that the head of archeology is visiting, there is also a priest, we try to enter the crude parking lot but are stopped by the police who impolitely tell us to leave. We ask them with curiosity… “what’s happening here?”, but they chase us away not giving away any secrets. We understand that this must be big. As we head back, we snap a few photos out of the eye of the guards and realize that we must wait until the big discovery is eventually revealed.

This week there is much in the media about this archeological site. It has been labeled as the largest tomb to have ever been discovered in Greece! It has been ruled out as Alexander’s tomb as history claims his remains were brought to Egypt. But the question remains, who was buried in such an extravagant way? Philip, the father of Alexander? One of his generals who helped him conquer the then known world? By the end of the year this mystery should be solved and probably give one more reason for you to travel to Halkidiki for archeology tourism.